Chromecast vs Nvidia Shield – Which is the best? 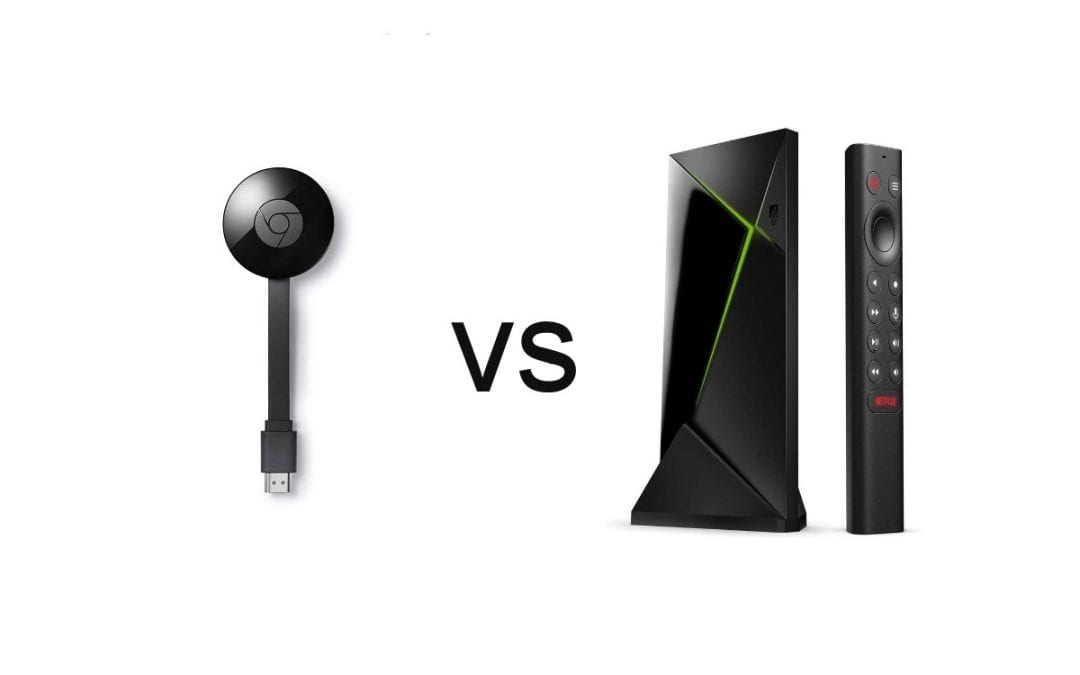 Streaming media players have taken over the home-based entertainment platforms with the price hike of satellite or cable TV subscription. With this, there are lots of media players made available for smart TVs. Sooner or later, the real battle has begun between different players and people are left with a question which one to buy. While there are lots of rivals, the article in specific deals with Chromecast vs Nvidia Shield in specific. The features, performance, specification, etc, of two devices, are compared most often. At the end of this article, you will get to know which player suits your streaming needs.

An Outline of Chromecast vs Nvidia Shield

Google’s Chromecast is a portable media player and you just have to plug it into the HDMI port of the smart TV. It is not a standalone streaming device as it lacks the support of real interface.

Nvidia Shield is yet another popular streaming media player to ditch the cable TV subscription. It looks like a setup box and in addition to streaming, you can use it to play games on the big screen.

Take a look at the differences between Chromecast and Nvidia Shield in brief from the section below.

With Chromecast, you will be able to stream only 4K and HDR contents. Besides this, it comes with the Ethernet port with Micro B port.

Whereas, Nvidia Shield supports Dolby Atmos in addition to 4K and HDR contents. Further, it has an Ethernet port and two USB port of Type 3.

Chromecast dongle needs the external support of one another device like Android/iOS/PC with Chrome browser. It isn’t a standalone media player and thus has no interface. Further, Chromecast has no support for the remote.

Whereas. Nvidia Shield looks like a setup box that comes with a remote and gamepad accessory. It runs on the Android operating system and you can access a large number of apps or games. Shield has its own interface and you can access its features easily.

Chromecast is a dongle that has no storage or memory built-in. It has no chipset support like its rivals. In short, Chromecast is simple to use a streaming player with the help of a smartphone or PC.

Unlike Chromecast, Nvidia Shield users will get up to 1 GB storage and 3 GB of memory. It features NVIDIA Tegra X1 chip and thus streaming your favourite entertainment contents is made easy. Further, the Tegra chip works the best in class while playing the games.

Chromecast is just a media player and has no advanced features like Chromecast. However, it supports casting media from streaming services right from the Android or iOS and PC with Google Chrome browser built-in. As there is no remote, you have to rely on the external devices to control the playback on the smart TV.

Nvidia Shield comes with Google Assistant built-in and you can voice control everything easily. The voice-capable remote control of Shield can be used to control various apps and games that feature built-in voice search. It even supports built-in hands-free search. Besides this, it supports Amazon Echo and you can control volume as well as media easily. With Google Assistant support, you can access media playback controls, control other equipment, and more.

Chromecast is priced between $35 and $69. You can access only the media files like photos, videos, music, etc. Chromecast doesn’t support accessing gaming apps on the smart TV.

You can buy Nvidia Shield at $188.48. Although the price seems to little high, it supports playing a wide range of games. If you love playing games, then Shield will let you get the best of gaming experience on the big screen.

Chromecast as well as the Nvidia Shield works the best in class and gives you the best of the streaming experience. If you are concerned about price, portability, and streaming only media files, then Chromecast is all you need. On the other hand, Nvidia Shield is quite pricey while it runs on Android OS and supports Google Assistance. You can even opt for Shield without any second choice if you love playing games on your television.