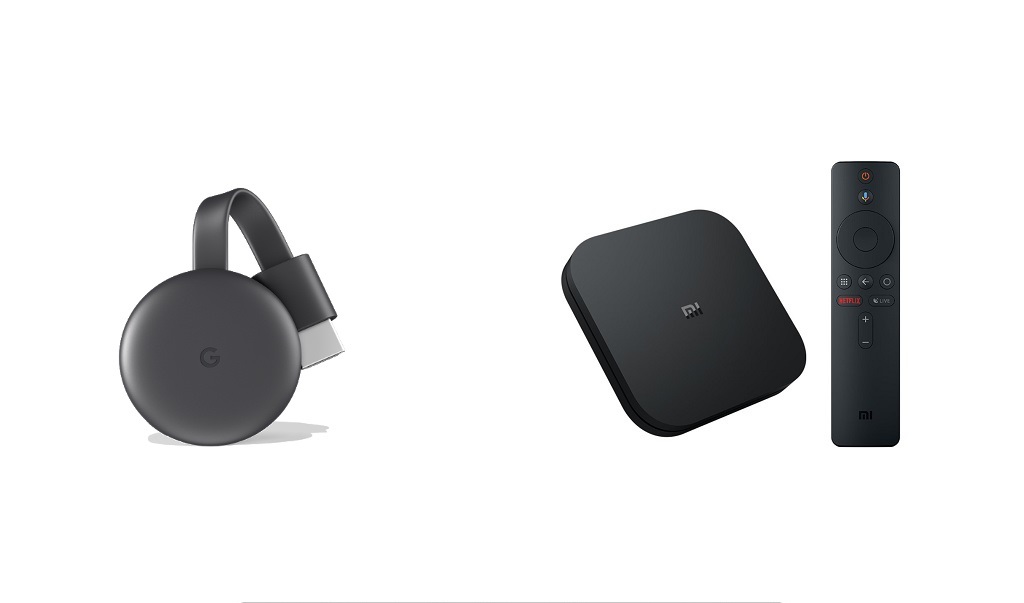 Media streaming devices Chromecast, Firestick, Roku, Mi Box, etc, are gaining huge popularity. They are affordable, portable, and comes with lots of handy features. While there are lots of powerful alternatives available in the market, the article particularly deals with Chromecast and Mi Box. There are lots of things that differ between Chromecast and Mi Box. In terms of price, Mi Box costs $70 while Chromecast Ultra costs around $69. Nevertheless, you need to blindly choose either of them. You should carefully analyze which one suits your entertainment needs. Read the article further to know which is the right streaming player ( Chromecast vs MI Box ) for you to get an unlimited entertainment right on your smart TV.

Mi Box is a standalone media player that comes powered by Android TV. It opens up the infinite entertainment contents and you can access tons of contents. Mi Box supports premium as well as free video services in 4K, Full HD, and ultra HD quality. It supports premium audio in Dolby and DTS sound system.

It is a smart media streaming player that you should connect it on the HDMI port of any smart TV. It isn’t standalone and needs the support of Android or iOS phone. You can even mirror your PC using Chrome browser and stream contents on your TV. Chromecast is all about casting or screen mirroring contents. Turn your phone or PC as an entertainment centre and thereby command your TV.

Take a look at the differences between Chromecast and MI Box from the below section.

Chromecast measures 5.2 cm while Mi Box is slightly bigger and measures 3.75 inches. Also, Mi Box isn’t that simple as Chromecast in terms of configuration. You require an HDMI and power cable to use Mi Box. Whereas, Chromecast comes integrated with an HDMI cable and power adapter.

When it comes to device storage, Mi Box comes with 8GB of eMMC storage while Chromecast has only 2 GB of flash storage. Mi Box supports wireless connectivity over 802.11a/b/g/n/ac while Chromecast supports WiFi 802.11ac.

Chromecast users need to rely on smartphone or PC to stream videos, music, podcasts on TV. Use the virtual remote on the same phone or desktop to control the media playback.

Whereas, Mi Box users can access its features just by providing the Google Account credentials. It comes with a remote controller and you can control video playback effortlessly.

Mi Box, as well as Chromecast, supports streaming videos in 4K to HDR quality. As Mi Box lets you access its whole interface, you will get the best performance while streaming videos at 1080p.

Mi Box is integrated with Android TV and you can directly access the Google Play Store apps. There are lots of streaming apps that are compatible with Android TV like Netflix, YouTube TV, Spotify, iVoox, etc. In addition to official apps, Mi Box supports sideloading third-party apps using file manager. The remote has a built-in mic and you can use it to search anything over voice command.

Unlike Mi Box, you cannot download any apps on Chromecast directly as it lacks interface. Rather, you can cast or mirror your phone or PC screen to the Chromecast TV. There are a wide range of apps that are currently cast supported and you can screen mirror anything to the big screen. It lets you cast contents to Chromecast TV while streaming videos over Netflix, Hulu, BBC iPlayer, HBO Go, and more.

Choosing between Chromecast and Mi Box differs from each individual. So, we aren’t concluding which one is the best as both of them has their own pros and cons. However, Chromecast works for those who don’t want standalone apps or interface. Buy Google’s Chromecast if you can control everything over the phone. On the other hand, Mi Box can be chosen by anyone who looks for standalone support. It is a great choice if you want to control the media on a big screen over the remote. You can buy either of the media players at a more similar price.