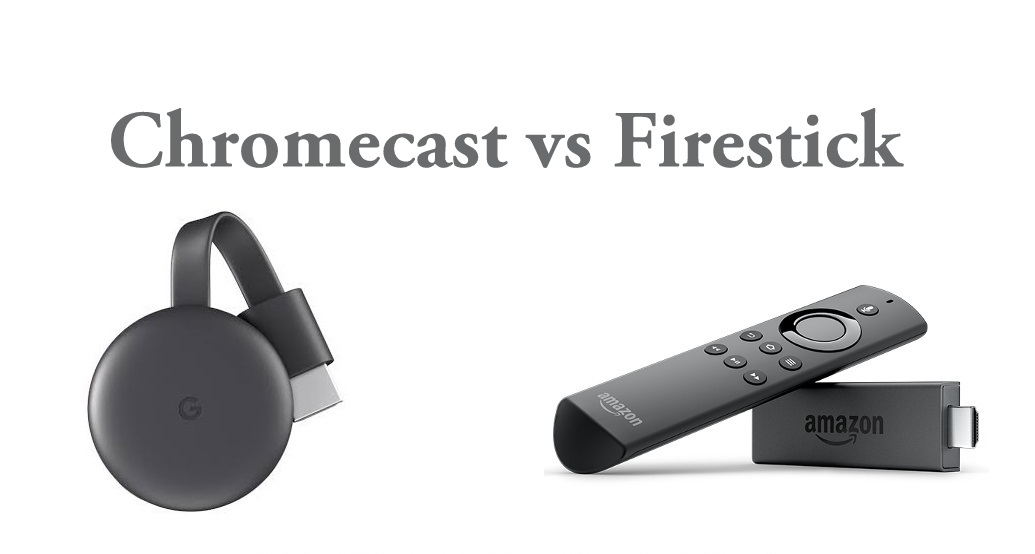 Everyone is aware of the price tramp of cable or satellite TV subscription. It has made entertainment fans out there to look for the low budget alternatives. When compared to the set-top boxes, streaming sticks and dongles are handy, convenient to carry, and smaller in size. Google and Amazon have been the rivals for some time now probably after they released the Chromecast and Firestick respectively. Either of them can definitely be used as a cable TV replacement. However, to make it simple, we have done a detailed analysis on Chromecast vs Amazon Firestick here in this article.

While Firestick and Chromecast intend to stream videos on your smart TV, they still have differences in functionality, performance, price, and more. Now, you will get a question like which one is the best. The answer to it isn’t straightforward as lots of factors need to be considered. Read on to and find out the best of Chromecast and Firestick to get hours of the streaming experience.

Chromecast is a service. In other words, you can cast any videos directly from the Chromecast supported app from the smartphone to your TV. So, you are in need of smartphone and apps with cast feature. When in case of PC, make sure you have the latest version to cast contents. Whereas Firestick is a device itself and you can install apps on the internal storage without needing to rely on the smartphone.

While Firestick is a rectangular shaped streaming player looks more or like to the external drive. Just by connecting the stick to the HDMI port of your TV. Further, all of its functions will be controlled by using the Alexa remote. The USB drive like structure will be sometimes don’t allow you to plug into other ports.

Verdict: When it comes to design and build, Chromecast seems to have more advantages than Firestick.

There is nothing to set up on Chromecast except connecting it with your WiFi network. All other functions can be done right from your Chrome browser or cast enabled apps.

Firestick is a device and it takes some time to set up in addition to connecting it with the network. You have to initially sign in to sync your Amazon account to thereby access all your contents.

Verdict: Chromecast is comparatively much easier than Firestick when it comes to setup process.

Chromecast doesn’t have any interface. You must depend on the phone or PC to control the playback of any video on the TV. Whether you want to pause, play or skip videos, the primary thing you require is your smartphone or PC with Chrome browser. If your app isn’t cast compatible, then you further need to the help of Google Home app to control the video. There is nothing much to learn new while using Chromecast. All you need to do is to just load up apps you already use and cast it onto the bigger screen.

However, Firestick has a user-friendly interface that is much easy to use even by the new users. The interface of Firestick has self-explanatory headers and just by clicking on it will let you access that section. Additionally, you can use the Bluetooth remote to navigate on the screen easily. You can effortlessly control the playback by using remote or use voice search for an instant result.

Verdict: Amazon Firestick has found to have better user-interface and control than Chromecast.

When it comes to performance, both Chromecast and Firestick works the best. Additionally, Firestick supports HEVC or H.265 files and with this, the Prime videos loading time will be reduced. It also reduces the wait time as it plays the videos directly.

Chromecast is just like a hub and you need not install any apps separately. Since mobile apps get updates first, you can access the latest version and the updates on the Chromecast enabled TV. So, you will less likely deal with the bugs and issues. Unlike Amazon Firestick, Chromecast takes a few seconds of wait time as the videos are cast from one another device.

Verdict: Choose either Firestick or Chromecast as both of them seems to give the best performance.

Chromecast users can access more than 20,000 apps and gives access to the most popular streaming services. While on the other hand, Firestick seems to have support for more than 3,000 apps, games, and services.

Both Firestick and Chromecast supports Netflix, Hulu, DirecTV Now, and you can stream them in full HD 1080p video output. Soon after the conflicts got resolved between Google and Amazon, Prime Video is made available on Chromecast and YouTube is now accessible on Firestick.

Verdict: Amazon Firestick and Chromecast are both goods in terms of apps and quality of the video.

Apart from streaming, Firestick supports a wide range of games. With Nvidia Shield, you will get a better gaming experience. You can play anything like Crossy Road, Flappy Birds, Alto’s Adventure, and more. In addition to gaming apps, you can also access apps from other categories in Firestick.

However, if you are a Chromecast user, then you have no way to play games on the TV. You cannot cast games from the handhelds to your TV.

Verdict: Firestick is worth using streaming device as you can play games on TV.

The third-generation Chromecast costs around $35 while is priced at $39.99. On analyzing the price, Amazon Fire Stick seems to be a little pricey than the Chromecast. If you don’t want to go with the expensive Firestick, then Chromecast is the better choice. On the other hand, if you want to stream videos without relying on one another device, then you can opt for Firestick. It is even better value for the money you spend.

Verdict: In terms of cost, Chromecast seems to be the cheapest streaming service.

Google’s Chromecast and Amazon’s Fire TV are worth the money. However, both of them have their own pros and flaws. Both of them have scored the same credits according to our analysis. We definitely agree that choosing the right streaming device solely depends on one’s own perspective. You may choose the one that you feel will work for you the best-in-class. In case if you have any queries or doubts, then leave a comment below and we will resolve it for you.