Chromecast vs NOW TV – Which is the best? 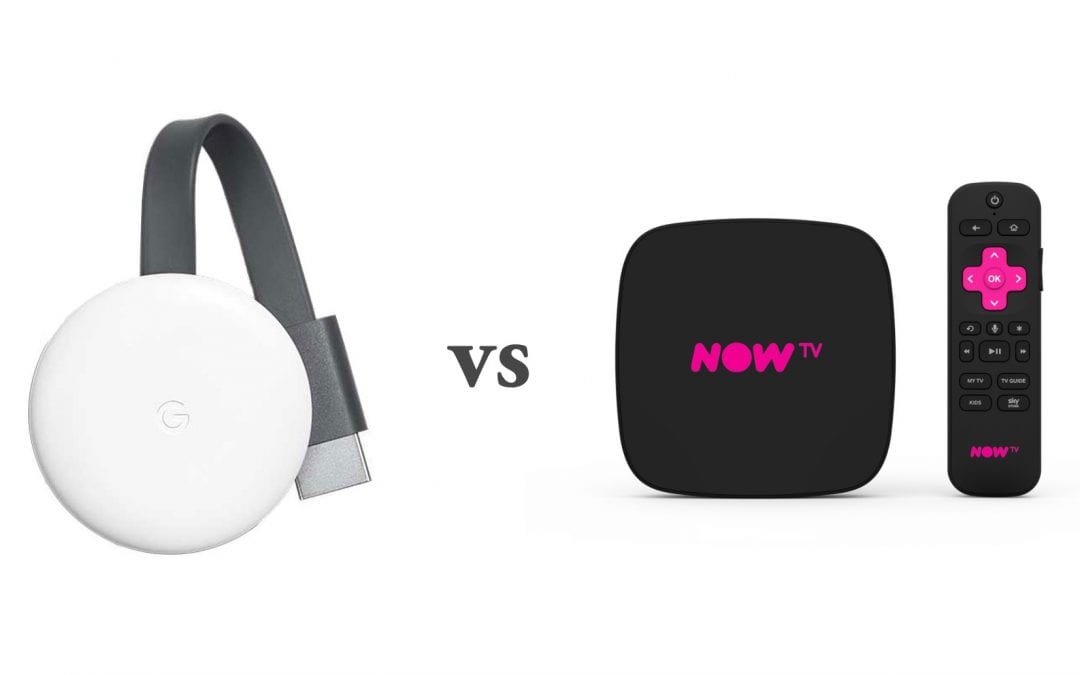 In recent times, smart sticks are transforming any TV into a smart TV. However, the usefulness of any smart sticks depends on what you stream. Google’s Chromecast and Sky’s NOW TV are the most notable lineups when it comes to digital media players. With both of them, you will get a never-ending streaming experience at any time. They have even opened up the support for plenty of free as well as premium streaming services like Netflix, Hulu, HBO, and lots more. Despite this, Chromecast and NOW TV box has lots of differences when it comes to setup procedure, price, design, content, video quality, etc. The article discusses all of them and you will be able to find which is the best streaming device at the end. If you are looking for Chromecast vs Now TV, then you can check the below post.

Google’s Chromecast is an affordable media player in recent time. It has made millions of smart TV users to cut down the cord. Chromecast is easy to use, supports accessing your contents from the smart devices, and for its reasonable price. A larger number of apps comes with cast feature support already. So, you can effortlessly stream anything from BBC iPlayer, Netflix, and more other streaming services using this dongle sized media player.

With cast feature on apps, you may screen mirror your smartphone screen to the big screen. Even those Chrome browser users can cast their PC screen to Chromecast connected TV.

NOW TV is yet another cheaper digital player and can be used as an alternative to the cable TV subscription. It will give you a never-ending entertainment on your big screen. NOW TV smart stick will look more or less similar to the USB pen drive. Unlike NOW TV stick, NOW TV box isn’t small.

It looks like a setup box and you can use it to stream anything. Despite this, both the NOW TV devices require you to additionally purchase the NOW TV passes to stream your favourite contents.

You may find the most prominent differences between Chromecast and NOW TV in the below section.

Setup & Ease of Use

Whether you have Chromecast or Chromecast Ultra, just connect the HDMI cable to the HDMI port of your smart TV. To cast contents from Android or iOS phone, you must indeed set up those devices with Chromecast. Once the setup is complete, you can easily cast contents from handhelds to HDTV. Chromecast is all the way easy to use as it has no interface. So, the users need not deal with anything complicated.

No installation needed and all you need to do is to just plug NOW TV stick into the TV, connect it to the internet and start streaming. You can enjoy loads of catch up TVs, apps, etc. If you have NOW TV smart box, then plug into the TV and internet to watch your favourite contents. The interface of NOW TV is user-friendly and you need to buy NOW TV subscription packages to stream your favourite contents.

Verdict: Both Chromecast and NOW TV devices are easy to setup.

Chromecast has no interface and thus accessing it easy by anyone. You need not understand anything professionally. Just choose a video from cast supported app and with a click, you can watch the same on the TV.

NOW TV features a simple and easy-to-use user interface. It doesn’t have any fancy contents. Just use the shortcuts from the left side and promo of recommended shows on the right.

Verdict: Chromecast seems to be the best choice as with no-interface.

NOW TV stick users will be able to watch videos in HD quality while the NOW TV box users can stream in 4K.

Verdict: Both Chromecast and NOW TV gives you the best of video quality.

Chromecast has no remote and you should use depend on an external device like your smartphone or PC to control the videocast to the smart TV. You will see a virtual remote on your phone as soon as you cast media to the HDTV.

NOW TV stick, as well as NOW TV box, have their own remote. It has few buttons to control the video playback like play, pause, fast forward, rewind, etc. In addition to this, NOW TV remote has a voice search button that will help you search for anything over voice control.

Verdict: NOW TV is the best as controlling playback will be easier with native remote control.

Those Android and iOS users have lots of apps that support cast feature. It includes different categories like video streaming apps, music apps, gaming apps, and more. You can, therefore, cast from anything from phone to Chromecast connected TV easily.

With NOW TV passes, you can stream thousands of movies, TV shows, etc. You can even watch favourite channels like YouTube, UKTV Play, Vevo, Sky Store, etc, right on your NOW TV stick, as well as the box with NOW TV, passes.

Verdict: Both NOW TV, as well as Chromecast, supports accessing a lot of apps. However, Chromecast stands out as it supports casting everything including photos, games, etc.

Chromecast primary model costs £31 while the costliest Chromecast Ultra is priced as £62. It is worth buying media player to play anything like videos, movies, and more.

Whereas, NOW TV stick costs £14.99 while NOW TV box is priced at £45.99. It is the cheapest media player to offer you the best of the streaming experience.

Verdict: NOW TV is the best as it seems to be lower in price than Chromecast.

NOW TV excels Chromecast in terms of price, remote control, ease of use, etc. But Chromecast handles more other digital contents in addition to streaming videos. You can even use it to access your own contents. You can choose Chromecast or NOW TV based on your view as the aspect of picking the right player varies from every other person. So, you can refer to this article to know the features of Chromecast and NOW TV and conclude to buy whichever you want.