Chromecast with Google TV vs Fire TV Stick 4K – Which One to Buy? 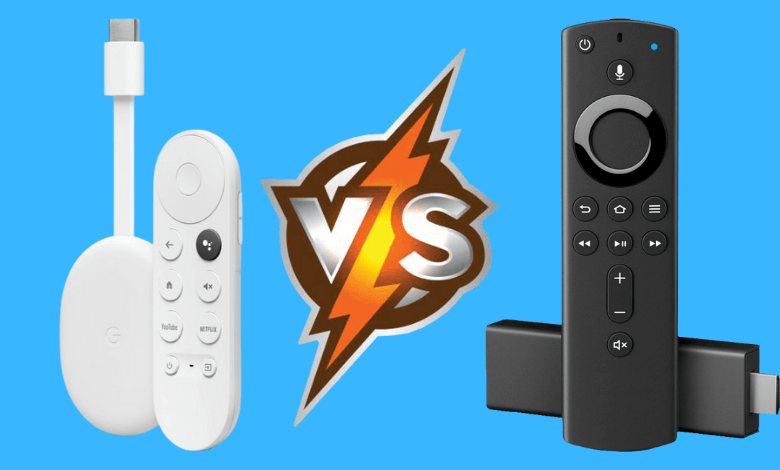 In the present day, we have a lot of different media streaming options including Roku, Fire TV Stick, Apple TV, and Chromecast. All of these devices have a lot of contrasting features to make your streaming experience better than others. However, you might be confused about choosing the right streaming device for your TV. That is why you need a detailed explanation comparing the features of popular devices in the market. So, you can choose the right device that meets your taste and expectations. This section is such a comparison of Chromecast with Google TV vs Fire TV Stick.

As we said before, this section is going to be a detailed comparison of Google TV vs Fire TV Stick. You can make use of this section to pick the right device for you. There are three different sections as follows.

Google TV is a circular device that is small and you can carry it anywhere. You can choose from three light colors including Snow, Sunrise, and Sky. The device comes with a voice remote in the same color as the Chromecast device. So, you can access Google Assistant with the remote to search for and play apps. Also, it has dedicated buttons for Netflix and YouTube on the remote.

Fire TV Stick is a rectangular device that resembles a bigger USB. There are no color options in a Fire Stick and that doesn’t really matter. It comes with a rectangular remoter with curved edges and supports Alexa. So, you can search for apps with voice support.

Google TV supports its own operating system and you can install apps from the Google Play Store. There are thousands of app that you can enjoy on your Google TV. Also, you can cast apps from your smartphones, tablets, and tabs from the Chrome web browser on Google TV.

Similarly, Chromecast with Google TV supports HDR10+ with 4K video quality. Also, it comes with Dolby Vision &d 60fps qualities and you need to adjust the frame rate. When it comes to sound quality, it supports Dolby Atmos, Dolby Digital, and Dolby Digital Plus. Google TV costs you $49.99 only and you can choose between three colors.

The additional feature on a Chromecast with Google TV is definitely the Chromecast feature. Most Android and iOS apps support casting and you don’t always need to add apps on your Google TV to stream them. At the same time, Fire TV Stick has better parental control features in comparison to Google TV. Furthermore, you can access Amazon Music on Fire TV Stick and listen to millions of songs.

These are the contrasting features of a Google TV and a Fire TV Stick. Both of them have pretty much the same features and similar apps. If you have movies on Amazon Prime Video, it is better to choose Amazon Fire TV Stick. At the same time, Google TV is a better choice if you have Google Speakers and movies on YouTube.

Google TV is more similar to Fire Stick than the Chromecast. This is because Google TV lets you download apps to stream.

2. What is better Roku or Firestick?