Chromecast vs Roku vs Firestick: Which is best? 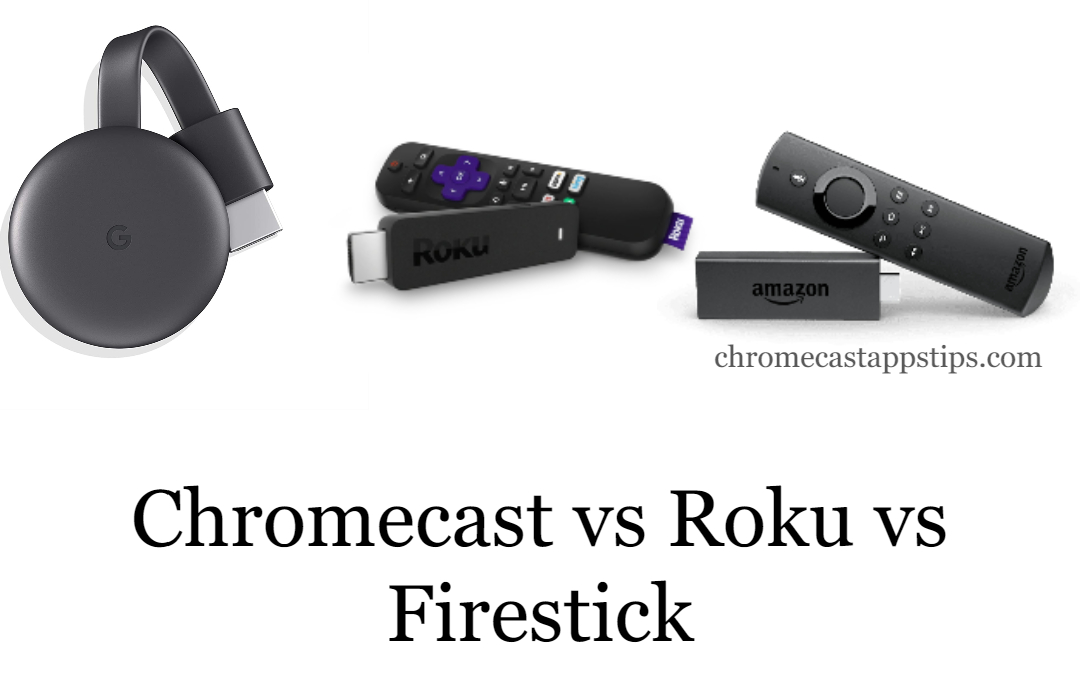 Chromecast by Google is a casting device. It is used to cast any media files from your PC, smartphone, or any other smart device to your TV. Until now, five Chromecast devices are launched by Google, Chromecast 1st Gen, 2nd Gen, 3rd Gen, Chromecast Ultra, and Chromecast Audio. The first device was launched in July 2013 and the recent launch is October 2018.

Firestick or Fire TV Stick by Amazon is similar to Roku. It is an independent streaming device. To install apps and games, there is an app store called Amazon App Store. The variety of devices is minimum but the features and tools offered are nothing less compared to other streaming devices. Amazon Firestick is one of the best streaming devices.

Chromecast vs Roku vs Firestick: Design

Chromecast is the only streaming device that is circular shaped. The 1st Gen device may look like a pen drive but it is no longer available for sale. With the circular shape, it looks more appealing and weightless. It occupies only a small place.

Firestick is shaped exactly like a pen drive but a little thicker. The remote control is a standard rectangular-shaped device. Fire TV Cube is a cuboid-shaped device. Like Chromecast, it won’t occupy much of a space. But it is thicker, it may disturb the nearby ports.

Roku has a similar shape to Firestick but with curves for extra comfort. But, Roku Express and Roku Ultra is a bit bulky device. It may consume a larger area when compared to other streaming devices.

In Design aspects, Chromecast is the best streaming device.

Chromecast vs Roku vs Firestick: Set up

Like every device, Chromecast requires a setup procedure. The external wire connections are as simple as charging your smartphone. The on-screen procedures are also simple. With the Google Home app, you can finish the on-screen process with ease. You can use an Android or iOS smartphone. The Google Home is the heart of Chromecast, without the app, you can’t do a thing in Chromecast. By using your smartphone, you won’t feel any distress.

In Firestick, the setup process is almost the same. Powering up the Firestick and connecting it to the HDMI port. In the on-screen process, you have to set up the remote that came with the device. With the remote, you can do the rest of the on-screen setup process. If you brought the device from the Amazon website, your Amazon account will be pre-added leaving you the account adding steps. Operating with the new remote may have discomfort.

In Roku, the external wire connection is the same as Firestick. Setup the remote and walk through the rest of the setup process. Your account is not pre-added or you can’t have any shortcuts. You need to finish the setup process all by yourself.

In the Setup process, Chromecast is the winner. Without any new device, you can set your Chromecast. Using a new control device needs some practice.

Chromecast vs Firestick vs Roku: Types

Roku has the most types of devices. It has devices up to 8 generations. Apart from streaming devices, it has other devices like Audio players and TV. As of now, you can have three types of Roku Streaming devices.

In the types, there is a tie between Roku and Chromecast.

Firestick vs Roku vs Chromecast: UI

Generally, Chromecast doesn’t have anything called UI. You can control it with your phone. When you click the Cast icon, the content will display on your TV. If you want to change some settings, you can use the Google Home app.

Amazon Firestick has a brown and black-toned UI with white-colored icons. There is not a major issue in the UI, but it does have some blank spots. When the app logo is in black color, it may not be visible correctly.

Roku has a white and blue colored UI. The background of the device is gradient filled to remove the blank spots. The apps and icon will appear clearer when compared to Firestick.

In the UI, Roku is the clear winner.

Firestick vs Chromecast vs Roku: Control

Firestick has its own remote to control. Other than a remote control, it has a smartphone app – Amazon Fire TV. Some Firestick has Alexa built-in so that you can use voice commands too.

Roku also has a remote of its own. But Roku remote is more advanced than the Firestick remote. It has four pre-added app buttons for Netflix, Hulu, Sling, and NOW. Click the button will directly open the app. It has also a smartphone app and voice command controls, but it is very limited.

In the control section, Chromecast is the winner. You can control it without any extra devices.

Roku vs Chromecast vs Firestick: Apps

In the Apps section too, Chromecast is the winner.

Related: Comparison between Chromecast vs Firestick

As considering aspects like Design, Setup, UI, control, and app’s compatibility, it is safer to say that Chromecast is the vest streaming device. Comment your opinions in the comments section.